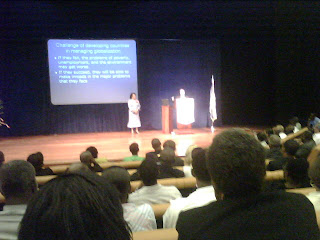 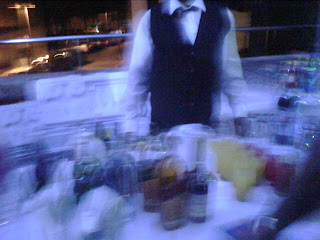 I am now on my way home from the 32nd Sir Winston Scott Memorial Lecture titled "Making Globalization Work for Developing Countries delivered by Professor Joseph Stiglitz Nobel Prize Laureate and University Professor Columbia University, New York. Professor Stigiltz is known for his work in Economics and has been a part of the Clinton Administration. It was clear of how well know he was when I entered the Hall 10 mins before his lecture and could not find a seat!
Also the present Min. Of Trade of Barbados Dame Bille Miller had sent Prof. Stigilitz book to the Central Bank's Govenor lobbying for him to be the man to come and speak for this lecture and flew non stop from Uganda to be in the Hall to hear this lecture.

This lecture is given as the highlight of the Barbados Central Bank outreach program, and occur just days ahead of Barbados Independence.

Let me take the time out to thank the central bank for making it all freeee!!!! Along with the cocktail reception after featuring Mr Johnnie Walker Red himself along with red & white wine and everything in between. Also with shrimp, conkies, chicken... Lol yeah...they know how to do it!!!!

Main Event
The main event was of course Professor Joseph Stigiltz lecture. I have to commend the Professor on making the subject matter digestible for a guy like me who is just enlightening himself to the financial world. I was fearful that the vocabulary alone of this Nobel Prize Winner would have been over my head. Thankfully I was able to follow.

Alrite so let me capture for you a few of the points to good professor made which stick out in my head.

There is a problem with globalization its I really not working out as we have expected. A lot of developing countries are seeing a great disparity in its advantages and disadvantages. The developing countries are not growing they are not seeing the grow patterns they have been accustomed to before globalisation. Brazil for example moved from recording 5 % growth as a standard to bringing a position where they think 3 % us phenomenal !

Mindsets have not changed,
Initially it was colonism and now its just globalization.

It is not that globalization is a bad thing but its just that managed badly,

Wealth if flowing from the poorer countries to the more developed countries.

2. These agreements are not really negotiated its a take it or else I will cut your funding etc. attitude the developed Countries come in with.

He gave the example of Mexico and NAFTA where NAFTA. What was happening was that America was having a lot of Mexican migrants because the disparity in income over the border was so great. So NAFTA was supposed to enhance conditions in Mexico so there would be no need for the Mexican people to migrate to America, however because of chapter 11 the situation in Mexico actually declined. What happened because of Chapter 11, was that the American corn farmers who were given 50% of their revenue by the American government via incentives, were now competing with the Mexcan Famers. And obviously they took over the Mexican market with cheaper corn, and in the end the farmers ended up being poorer.
Clearly the American's bebefitted and the Mexicans didn't. And we can all figure that out today.

He did make the point that Mexico should have spend more time in research and development allowing themselves to develop competitive products for the global market place, so that they could make some use of the free trade agreement to
Remain competive and compete with cheap goods being made in China and exported to the USA for example.

He also made the point that the developed countries make the point to divide and conquer the smaller nations by making unilateral agreements with each developing state individually.

He thinks that developing countries should pull together to increase bargaining power and enhance their ability to negoitiate better arrangements.

Another example that stuck out in my mind was bangledesh. He said USA made a 'free trade' agreement with Bangeldesh, where they were alllowed to export 97% of all products produced to the American people. Sounds like a great deal right? Well wrong, by this deal Bangeldesh was only allowed to export things like Jet Engines in that 97 % but that 3 % they were not allowed to export the things they actually had which were textiles etc.

Free Movement of Capital Vs Free movement of Labour

He said we were allowing capital to move and not labour, but would should be allowing labour to move. Because by allowing capital/investment to move the issue becomes more about what is the best deal.
The consideration is not for the other things like enviroments issues but just how can we get the lowest price.
If labour was moving the government would have to spend time making sure that they have things in place like proper health care, working conditions etc, so that they can attract the best labour force.

He was saying that we are now a part of a global country now where economic crisis USA is having impact on developing countries even though there is not a direct link.
Also as issues like global warm affect everyone in the world, a new wave of thinking is forming where USA and the EU are beinging to appreciate the role developing countries play in their future and the future of the world. And they are beginining to appreciate the need for democracy in the international society rather than their present mood of operation where Trade Ministers are given a list of consessions they go out try to solicit.
I think the best example he gave of this, was the fact that we should all make payments to those countries which provide the world with air via rainforest. I think this was my highlight of the night. Essentially the Prof was saying we should commit resources to combatting the serious threat of global warming by ensuring the rainforests are protected in these developing countries. Wow, such a simple solution just based on a matter of perspective. The rainforest is important to all of us. I mean think about it, you are breathing now right? How much would pay to keep your life? It affects us all!

The question is only whether we make changes before or after a crisis, and hopefully it won't be after in a patch work way which will just pace the way for another crisis later.

As another area he talked about Intellectual property.
He said intellectual property mechanisms in US is stiffilling creativity. And it is this mechanism America sold to the world.
He made the example that the USA government took over the legal battles over patents for the aeroplanes so that they would be ready for World War 1.

He used Microsoft as an example where they crush innovation by their way of operation.

Knowledge is like a candle, when you light a candle is does not diminsh the light from the first candle. Thomas Jefferson

This is how we need to treat intellectual property so that we can move the world forward.

Well it is now 1:43 am, I am going to stop now.
I trust that this captures the main points of the lecture and offers some level of enlightenment to you, if you missed it.

PS. Besides the food the cocktail reception was an excellent networking opportunity.

CG 2.0
Sent from my BlackBerry® wireless device from Cable & Wireless