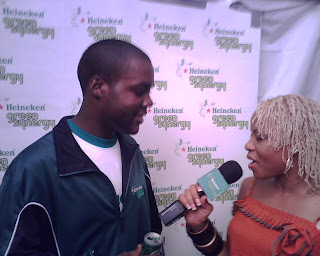 Dirkmouse "Da Bouse" Interviewed after his win by Tempo

Getting to you first as usual and upclose in the behind the scenes.....
Dirkmouse 'Da Bouse' was just announced as the winner of the Heineken Green Synergy Semi Finals(Barbados). Top Sounds from Grenada came second. They will be off to Curaco for the Heineken Green Synergy Finals.
Both DJs had their sets stopped short due to technical difficulties. However they both kept their composure and remained focused on the crowd.

Dirkmouse "Da Bouse"
The highlights for me were Dirkmouse's selection of 'let's get it on' in the middle of his set that threw the crowd in frenzy. And his flawless beat juggle, which he made look so effortless.

Top Sounds
Top Sounds soca mix down was sweet, sweet, sweet. And his general charisma on stage was simply sweet.

Let me offer my congrats to them both publicly ...
Its been a long night people, I will talk to you again soon!