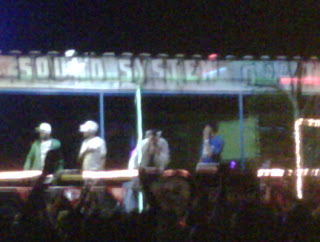 Mr Slaughter came and delivered at jumbies. He was a bit restricted by the stage, being that it was a 40 foot truck. However you can't beat the creativity.
Even after he performed he was in the crowd having a blast with the brewsters road crew.

Ole, ole aka Matador was his tune that I found people singing after it was all said and done.

It was definitely a nice crowd and full of people that came out to really enjoy themselves to the soca. I found not too much new soca was played, but it was the right mix to keep the crowd happy.

Oh Slaughter also had a nice DJ set selecting from past and present bajan hits smoothly and effortlessly keeping the crowd in the palm of his hand.

Any how all of we drunk, all of we staggering ... Hahahaha... I think slaughter might be on to something.

Most drinking songs are kinda selfish. Just talking about me. But Mr Slaughter is finding a collective.

I still like the singles because at the end of the day, it is cool to be loud and boisterous in a fete. Sing I loud and I feeling tipsy..."Balance Me"
Even if you not tipsy!!!
Lol.

Sent from my BlackBerry wireless device
Posted by Corey Graham 2.0 at 4:14 AM