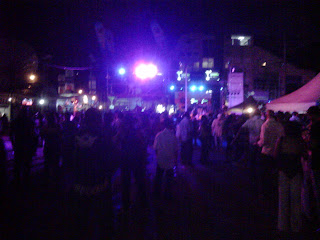 Well, I am back in Barbados now, from my 4 days of Trinidad carnival.

It was a very last minute trip, a small miracle happened and I was off to TT on Friday evening.

Girl Power was the first event, in a new venue - the Queen's Park Oval. I was in the VIP section which was filled with lots of humans from all over the globe, almost everyone you talked to was a new accent. The free drinks and free food keep flowing right through the night!
I was expecting to see most of the major live band that were billed for that night's performances but it was not to be!
The event finished much earlier than we have come to expect. At 5 am! The sun was not up yet and I had only seen Kes The Band. They were ok.
Machel was out next to the surprise of the crowd. He did his usual thing and performed in HD style.
I enjoyed most his performance of 'Won't Stop' my new anthem! It seemed to be a big crowd favorite. Getting Machel his biggest response of the night.
Oh I almost forgot, Rachel Price and Jason Williams did their thing for a while before Machel came out. Discussing the topical issues of the Carnival, definitely sticking on the road march debate for a while.
Their top picks were
Faye-Ann Lyons - Meet SuperBlue
Destra - Bachannal
Blaxx - Tusty
Machel - Wild Ants

Finally we got all of 15 mins of Bunji Garlin and Asylum Band. Featuring the newly crowned Soca Monarch Queen Faye-Ann Lyons who rocked the crowd. Faye-Ann is the definite crowd favourite. She was a true Queen on the night!
After a little tribute by the leader of the Godfather's Asylum, Bunji Garlin. She was off to get her much rest, being 8 months pregnant.

In quick time Edwin Yearwood, Benjai and Beenie Man were out on stage and Bunji was signing off as the police said it was time to end the show.

Though disappointed that I did not get to see the show, I still enjoyed the atmosphere of Carnival Friday and was enjoying taking photos for BoomTribe.com again. Its been a very long time since I have taken photos at an event. I still got the skill. Trust me there was still ALOT of rust though. I had to rely on BoomTribe Photographer Edwin O'neal to really back me up!! thanks Edwin!

After the fete I met up with the Toronto-lime crew and took in a few minutes of the St. James - Smokey and Bunty lime.
This was amazing how people from all walks of life gathered and was liming dancing, wining on each other, wining on parked vehicles, on moving vehicles and it showed no signs of slowing down!

Carnival is really a part of the people. The rest of my trip showed me that you can't really appreciate the magnitude of this fete.