Well, well the First Bajan All Stars Mix Tape is finally done. It was the brainchild of One of the Top Turntablist in the Caribbean, DirkMouse "Da Bouse" . Congrats man, you worked hard to make it a reality and it is finally here. You know me, I support anyone who is getting up and doing something to build up our industry. Lip Service gets us no where. And that is why late last night I took to time to find Dirkmouse and interview him for my blog.

Before I bring the interview to you let me just say the Mix Tape is of a high quality and standard as we expect from Dirkmouse. Personally I would have liked to hear more Bajan accents and some more positive flavour in terms of content, but its the first one, so good work. Learn your lessons and make the follow up project bigger and better! 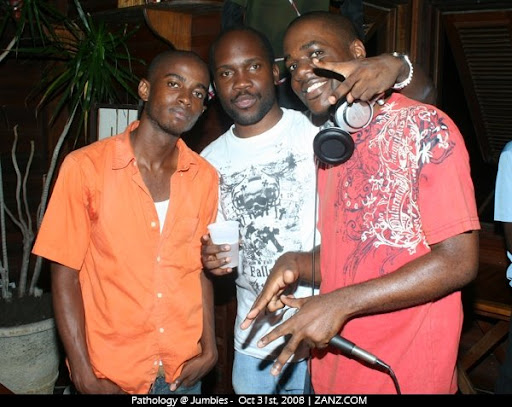 Scott "Le Roc", Corey Graham 2.0 and Dirkmouse @ Sexxy Halloween Jumbies
How does it feel that your first Bajan All Stars Mix Tape is done?

It feels great. I am excited about the first project. I think its a good look for local hiphop and it can eventually channel the music industry in the right direction.

So what made you start the project?

I began the project because I felt it was warranted. As a hip hop fan I saw the state of things and thought to myself that I could definitely make a difference in how local talent was received in the island.

How are you going to go about making the difference you mentioned?

Well, I have a strategic plan which is linked to my belief in there being a market out there craving for this talent. Its an ongoing monthly project and the mere fact that the mixtapes will be produced and distributed freely it will allow the market to grow and expand at a rapid rate. This constant distribution of material will eventually make the artists household names and even eventually superstars. Maybe we could see another Rihanna type figure in the making.

Sounds like a plan! What forms of distribution will you employ?

At present the mixtapes will be distributed via internet (first & foremost) and also by traditional hardcopy. I was grateful enough to have bajandancehall.com , bajantube.com . and onnpoppin.com come onboard to help propel and push the project.
Ok…Tell me about the actual project… what was the experience like inviting artists to feature on Bajan All-Stars… The Mixtape?

Well being that is was something new and fresh, some artists were skeptical and therefore “Da Bouse” had to do some ‘duck hunting’. Some proved illusive while other were shot and caught (lol). On the other hand they were artists who were excited and eager about the project and promptly came through to lay their material.

So what can the public expect from this project?

On the tape you can expect raw, whitty and intelligent rhymes, from gully to sexy and everything in between. Some artists were even able to combine bajan sayings and slang into their deliveries which I thought was really creative. I must say you will be really impressed by the quality of the artists who came through, everyone seemed to be on their ‘A’ game and delivered accordingly.
As for the mixtape itself apart from the artists.... you can expect a classic styled project. The tape is not only classic in style but classic for its time since the way its done is an almost forgotten form among djs today. You can expect cutting, scratching, blending, beatjuggling, remixing and lots of bombs (lol). Its gets really crazy at times.

Alrite sounds exciting, any special promotions planned for the mix tape?
At this time no special promotion is planned. The tape will be marketed via the internet and by word of mouth. I will be hitting the streets sometime next week distributing hardcopies to persons. My special promotion consists of me doing my part and making sure it gets to people even if its done personally, after all its free… no stress or need solicit. (lol)

When can we expect the follow up project?
You can expect it in early April. I expect a greater turnout for Vol. 2. It will be the last in its series after which we will move on to something fresh and equally exciting.