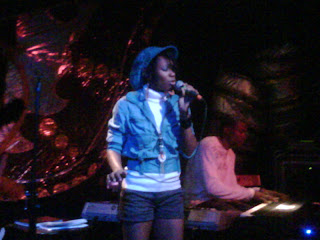 It was an interesting session last night with Mahalia getting a tad emotional on her audience.
Yeah she was really performing the songs with some passion. She said she was a little nervous about the poems, but she did a good job.
Mahalia it would be good to see a lot more of that. Bring some more original compositions and showcase some real Mahalia flavour.
The open mic made way for some of the talent sitting in the audience to show their skills.
The interesting thing I found is that most of the people in the audience were also writers and singers and the open mic showed that!
DJ really did stand out for me, doing a piece he wrote late last year describing what poetry is.