Danaa The First Lady Of Roamin 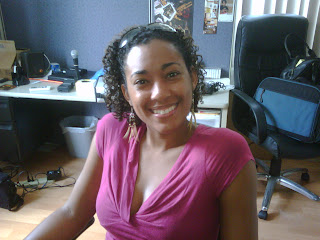 Danaa was in the BoomTribe HQ today just passing through to catch up with the Roamin producer Shamkoe (just outside of the pic) as they make the final preparations for another Season of Roamin!

Now for those of you who don't know Roamin is the Caribbean Music video show produced by Alt Entertainment - www.altentertainment.net. (Parent company of BoomTribe)

Roamin is now approaching almost 10 seasons, and Danaa has been one of the consistent faces in the show. She has her fans too, reaching as far as Costa Rica!

Look and how photogenic she is right there. Danaa is a talented lady, an award winning dancer too!

You want to know more? Well tune into the next season of Roamin! Premeiring on CBC TV 8 in Barbados May 7.