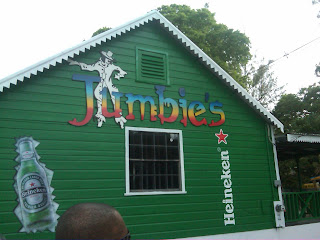 Friday nites in Barbados was rocked by Jumbles ya ..... for a while. I think BoomTribe had something to do with it. I remember the very first night I set foot in Jumbies was for a casual friday lime.
In a few weeks when Happy Fridays Launched the Gap Friday nights were not the same again. The one was the day before the Cricket World Cup Final.
It was a great party with some Aussies and people from all over the Globe.
After that a few limes with some friends in the weeks following. Jumbies took off in a serious way, long lines in the gap.
It was the place to be!
After a year or so the Happiness turned to Sexxy. They were some sizzling hot girls in the place.
Well let me admit Jumbies was the spot for me on Fridays. Let me talk about what I know!
Dj Hoodini the versatile house DJ, BoomTribe Djs, Heineken Green Synergy Champ - Dirkmouse Da House, and Mayhem sounds, Malcolm X were the main stay and rocked the dance for many,many fridays nights.
Well Jumbies has relocated now and on a different coast.
They are not opened for business yet. I wonder if Jumbies can create that same magic again.

Sent from my BlackBerry wireless device
Posted by Corey Graham 2.0 at 1:22 AM