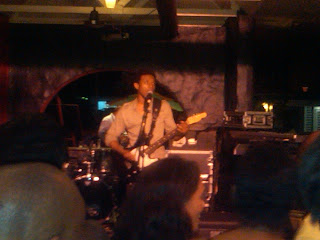 I just attended Hal Linton's listening party. He is the only male act signed to a major label taking the time to let the bajans hear his new album before the rest of the world.
Hal delivered a a very energetic performance walking in and out of the crowd. I had my moments of enjoyment in between talking to the patrons and conducting interviews.
It was nice to see Hal invite the heads of the the local organizations who were instrumental in facilating his major label deal on stage and give them a token of his appreciation. Barbados Tourism Authority and Invest Barbados were among those who received their gifts from Hal.
The highlight was when Hal called local radio announcer Gaynelle on stage and they freestyled in song much to the amusement of the crowd.
In his interview Hal expressed his desire to be a part of the development of the Barbados music industry.
All in all I am sure a great time was had by all.
Posted by Corey Graham 2.0 at 10:57 PM

True dat!
I see we're both buzzing from the event.