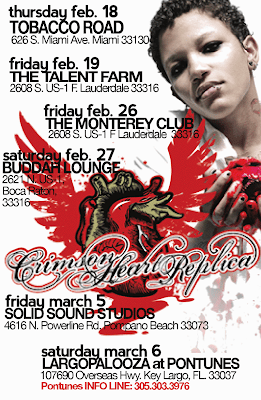 Crimson Heart Replica brings “JamRock” to South Florida
"Heralding Jamaica’s underground, commanding the voice of angels, axe in hand, and talent unrestrained, Crimson Heart Replica is poised to deliver her first strike on the expectations of the South-Florida audiophile.”
(The Friendly Misanthrope, S. Florida Ent. Writer)
With her sultry, haunting voice intermixed with alternative rock beats, reggae and acoustic soul, Jamaica’s Crimson Heart Replica will bring “jam rock” to South Florida on Feb. 18 when she kicks off her 3 week promotional tour at the legendary Tobacco Road (Florida’s oldest live music venue) in support of the May release of her first EP –  “Sad is the New Beautiful.”
According to Kat.Wil (the voice and face of Crimson Heart Replica) who recently signed to management agency 360ARTISTS, “i’ve felt renewed with the upcoming release of my EP.after 5 years of giving music my all,i look forward to this milestone in my career. its been a long time coming and sad is the new beautiful still remains a saying i live by.nofear of sadness.instead,these songs have paved the way for me emotionally and as an artist.reflecting and symbolizing all that embodies my crimson heart.”
The EP will feature tracks such as “Gettin ill,” “Beautiful Mistake,” and “Kingston Town” and will be distributed worldwide.
The upcoming shows represent a step towards nurturing a growing South Floridian fan base. “south florida has been my home away from home.i feel prepared to perform at my very best.its not a simple task crossing over to the american market as an 'alternative' jamaican artist.but i respect the challenge.”
Kat. Wil. has often been credited with stimulating the growing rock culture in the Caribbean, sharing the stage with celebrated artists such as Diana King, Kenny Rogers, Sean Paul, Shaggy, Tessanne Chin and Rootz Underground, while representing the genre locally and overseas. CHR has performed at the annual Jamaica Jazz and Blues Festival several times, Calabash Literary Festival, Kingston on the Edge (KOTE), the Flash Point Film Festival, Kingston’s Tuesday Night Live, and in several well known venues across Florida, and New York including Vagabonds, Churchills, The Trash Bar and Kenny's Castaway.
Fans can expect to be treated to live performances of several crowd favorites as well as a new spin on a few classics.
Pre-sold tickets are available for all performances.
For more information please call 954 638 7454 or email threesixtyartists@gmail.com
Corey Graham 2.0
www.CoreyKGraham.com
Posted by Corey Graham 2.0 at 12:37 AM