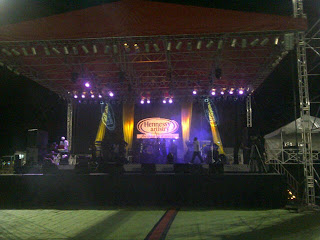 It's been a little while since I have been out. Tonite I'm at the Hennessy Artistry show with Beres Hammond and Cocoa Tea headlining. Meanwhile in Trinidad you've got Junior Gong, Nas and Jah Cure on the same stage! Yeah that's big on.
If you wanna know what is going on around the Caribbea check out the www.caribbeanentertainmentsearch.info

This is just the second year of the Hennessy Artisty though and its been creating a bit of a stir in the Hennessy world.

Beres was always one of my favourite artiste. Last time he was on the show I had the pleasure of conducting an interview with the legend after the show.

Anyways Peter Coppin and Tammi just took the stage to get the show started.
High Grade band about to live with front liners Peach & Supastar.
Sent from my BlackBerry® wireless device from LIME.
Posted by Corey Graham 2.0 at 9:31 PM